It seems kind of surreal to me to be writing a post advocating organization.  I am not really the most organized person in the world.  In fact, I'm a piler.  I like piles.  I organize with piles.  In fact, I usually find things because I can remember what pile things are in.  In the sewing room, however, piles just don't work for me.  There's too much stuff to keep track of, and little things tend to get lost so I end up buying 5000000 snaps because I don't care to remember where I put the last pack I bought.

Recently, though, I undertook a massive reorganization in my sewing room.  It was an extension of a great system that had started at my last house about 6 years ago that I had grown out of. 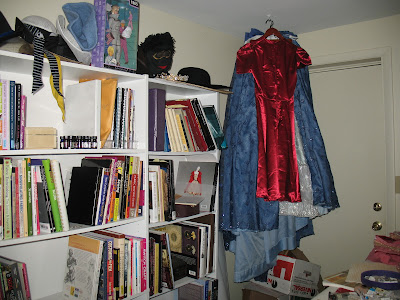 When I moved to my current house I got so much more space for my sewing and storage, but I had no system so it all piled up in bunches until the piles grew together and everything was chaos.  When I finally got sick of it I decided to do something and not only clean but set up a system so that I could work happily in my sewing room.

Next was the thinking stage.  It's very important to think about how you use things and how you work in order to make a system that works for you.  For instance, my first organization system was set up by my best friend.  She is an organization fiend.  She had my sewing room whipped into shape in no time.  The problem, though, was that she organized according to how she THOUGHT I worked, not how I really worked.  Some of her ideas just didn't work for me.  For example, needles had a needle pouch inside the notions bin.  I was constantly reaching for them, however, so frequently that I never put them back where they went and was constantly loosing them.  This is the kind of thing you need to think of: what you use often, what you think of when you need it, and where you use it. 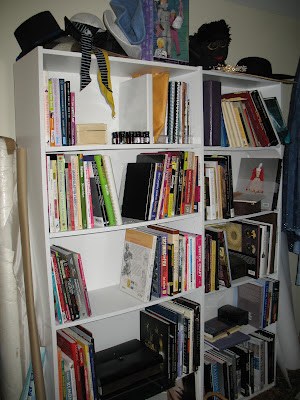 After that I started organizing things according to my logic.  I started with an easy point: my bookshelf.  It was filled to overflowing, so we got a second shelf and relieved the load.  For me, deciding to fill the second shelf with costume books was an easy way to half my books between the two shelves.  Hats went on top, along with a few random things I wanted to display.  All the "I dunno where this goes" was taken off the shelf, and magazines were moved to the small bookshelf that ends my cutting table.  The shelves are much more organized and look better now, too. 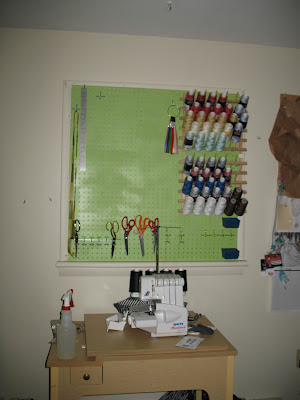 The next thing I tackled was my window situation.  Since our house is a rental we have really, really crappy windows.  To save energy we covered them with quilt-batting-and-blackout drapes to keep heat and cold in.  Effective, but ugly.  I never used the windows as anything more than shelves, which left a lot of wasted space.  So, to more effectively utilize this space I got a pegboard cut to the size of my window and secured it in place with mirror-hangers so that it is quickly removable and replaceable in case of some window emergency.  I hung lots of quick-need things on my pegboard like my scissors, cone thread for the serger below, my wig sample rings, tape measures and rulers, snips, etc.  Now I don't loose my scissors nearly as often because they have a place to go (and they're even organized into fabric, pinking, and craft!). 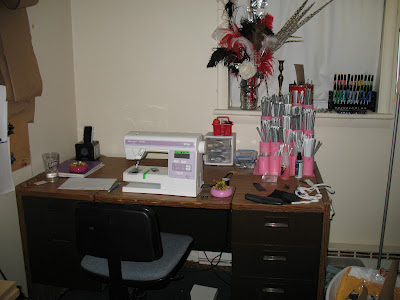 Next I took on my sewing desk.  First I cleaned off the entire top, taking off all the stuff I had piled on it.  Then I decided what was most important to keep on top of my desk: my clock to play music from my iPhone, my boning organization (an ugly pvc-pipe arrangement that I painted pink so it was more festive), my pins, a small drawer set that holds needles, marking tools (a mistake I will soon remedy, I mark things over on my cutting table), and stuff like fray check, my spare thread bin (I like to quickly change thread for projects without having to put it away and get it back out of the big bins across the room, so I have a thread bin to clean out periodically that keeps me from walking so much), and a little organizer with randomness like chapstick and lighters for fabric burns.  The drawers have stuff that I access often: the top left has all the instruction books for everything plus things like tacks and rubber bands, and below that is big boning coils.  The top right holds my bobbins, machine feet, and machine needles, and below that is corsetry stuff split into lacing, busks, and garters and rivets, grommets, and setting tools.  My setting hammer stays in that drawer not with tools because that's where I use it. 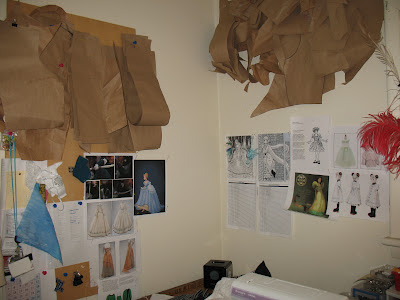 Above my desk is a major sewing inspiration area.  To the left I have a huge corkboard that holds my master body blocks as well as some work-in-progress randomness like dye samples, inspiration pictures, and all the ready-access hand needles I need.  To the right is a more permanent inspiration corkboard and, above, corkboards to store the old patterns I've drafted. 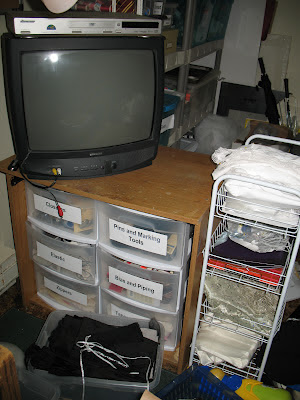 Next is my TV stand, another place I used to pile stuff.  I cleaned out underneath it and put in two drawer sets to organize small things like closures, zippers, elastic, etc.  To the right you can see a set of shelves I use to keep the stuff I'm currently working on so it's organized but accessible, I've since moved it over to my cutting table because that's where I was always using it. 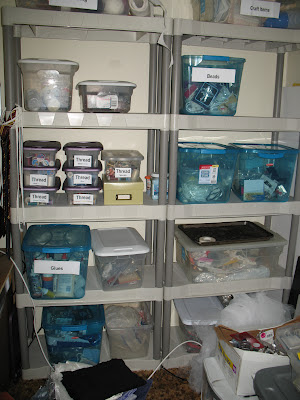 These are my big storage shelves.  They hold large bins of stuff like glue, jewelry making stuff, craft stuff, electronic stuff, hardware, yarn, threads, and project bins where I collect all the stuff for a single project that I'm currently working on. 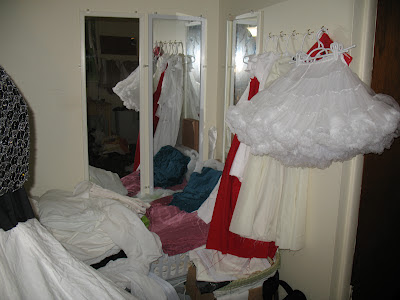 The shelves form one side of what I think of as my "fitting nook".  The other side has three mirrors on the wall to look at things.  Under that, the final remains of my pile system: all the muslin fabrics for mocking stuff up.  I'll be organizing and removing this to the basement soon.  On the wall on the right are a system of hooks for holding projects in progress, right now they're holding all the mock-ups for Thing 1's Costume Con costumes.  In the foreground you can barely see Lindsey, my dress dummy.  She usually sits in this corner, too, accessible but out of normal traffic even when she has a huge hoop on. 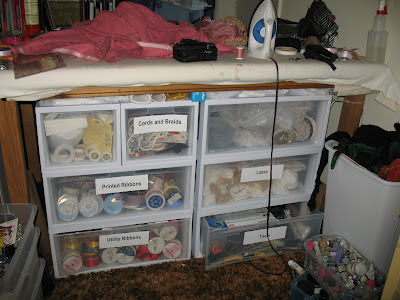 Finally for my sewing room, my cutting table.  I put it on college dorm bed risers to make it the right height (your cutting table should be as tall as your elbows when you're standing comfortably).  That made more room underneath for storage.  Ribbons, trims, laces, cords, and ironing stuff stays on this side, while patterns live on the other side. 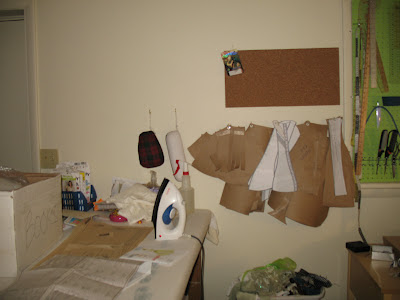 There are other storage solutions that are not in my sewing room.  I'm fortunate enough to have room in my spare bedroom for another series of drawers that holds costume accessories like jewelry, socks, wig stuff, and other randomness plus scrapbooking and quilting-specific bins.  The top bunk in the spare bedroom holds all my hoopskirts comfortably.  I have more costume storage in the basement. 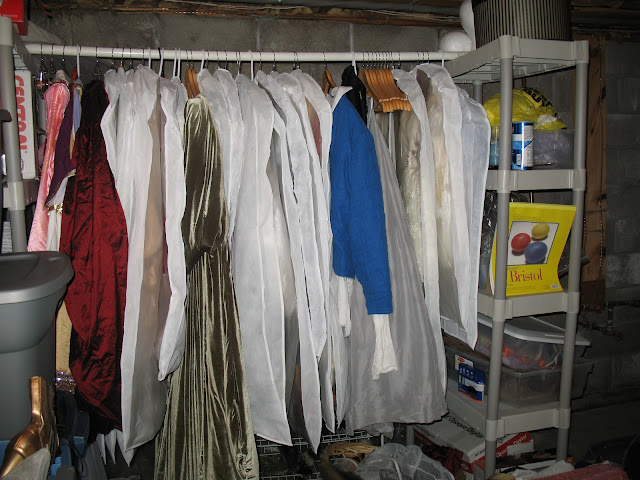 This storage system has to be the best thing my best friend has ever done for me (which is saying a lot, she's a solid friend!).  It's made of two heavy-duty storage shelves (the higher the pounds-per-shelf rating the more stuff you can store).  A drill bit on an electric drill, two pipe brakets, and a set of screws, washers, and nuts secure a pipe between the two shelves.  I can store tons of costumes on this rack, plus it's 7' tall so it can hold all but the longest trained dresses without needing folding.  For organization I put all the pieces for a costume together in a dress or suit bag that's fabric on one side (all plastic can hold in moisture, promoting mold and mildew and acid fabric degredation).  Things like shoes, gloves, etc go in a lingerie bag that's in a bin on the floor or on the shelf.  Small things like jewelry get put in a jewelry pouch in the lingerie bag.

My other basement storage is a heavy-duty shelf for paints and dyes and lots of bins for stash storage.  There's a spare clothes rack filled with hanging shoe organizers for all the costume shoes I've collected.  This is also where I initially stored the "pile" bins, but I've gotten those all cleaned out and organized and I've even been through all but one that I moved full of pile stuff.

Although all this is still a work in progress I'm pretty proud of how it is.  Work-in-progress is important, though.  I think your organization should always be a work-in-progress.  If you declare it's "finished" it's harder to change things when you need to, and that's the key to good organization.  If you're constantly looking for things that don't work and how to fix them then you'll never get into a rut where things don't work so clutter forms.  My other big piece of advice is to make things work for you.  It may not make sense to my husband why my jewelry pliers are in the jewelry bin and not the tool bin with the other pliers, but it makes sense to me.  Since I'm the only one who needs to work in my sewing room that's fine.  My final advice is labels.  Labels are good, especially when you've just started an organization system because they help you remember where things are and where they go.  However, it's  important to remember that labels are cheap.  If things don't work change it and change the label rather than pidgeon-holing things and forcing them.  You slapped a label on there once, you can always do it again.


What's your organization system like?  What is your biggest tip to people who want to get organized?
Posted by Aurora at 2:28 PM