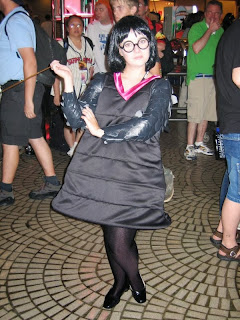 Lots of people freeze up when a contest wants costume documentation. Face it, I wrote enough term papers in high school and college, or maybe still have to write them, and I don't want to write another just for fun. And I feel for you. Really. I too have avoided contests that require documentation because it seems scary. But then I figured out the 10 minute way to write documentation that will please any judge. So sit down, grab a scrap of paper or a napkin, and we'll have good documentation in no time.

Start with a finished (or nearly finished) costume. I know, if you're like me the costume will NEVER be finished and you'll be working up until the day of the contest. But work with me here. The best documentation is of what you've done, not what you're going to do. If necessary print this out and do it in the car ride to the con. Just be sure to do the last step before you leave.

Okay, let's start then. The first question to ask yourself is "What rocks about this costume?" Yup, that's it. What's the one thing that will make you really sad if you forget to tell the judges? If you met someone in the hall and they only had time to ask one question, what would you want it to be? In short, in your opinion what's the greatest thing about what you've done? Take a minute to think about it, then write that thing on the top of your card. Take one sentence (30 words or less) to describe why it's the best thing. Is it the first time you've ever tried that technique? Is it different from every other costume you've ever seen? Was it really hard for you to perfect? Whatever it was, simplify it and write it down.

My Edna Mode costume is cool because I had to do lots of math to get the proportions right on the skirt width and length.

Don't worry about it being too simple, because in all the contests I've seen that want documentation you'll have time to talk to the judges about what you've written. You can always give them more information when you talk to them.

Now draw a line across your card/napkin/hotel notepaper. Yup, that's the end of part one. Not so hard, is it?

Next think about everything you eliminated in writing part one. You're going to get slots for three things this time, so all the ones you liked that were close, but not quite winners can be put here. However, now you've got a 15 word limit for each of those things.

The dress is satin that is quilted and supported by hidden hoops.
The sleeves are a base of cotton that is covered with vinyl 'scales'.
The scale proportions were obtained by making mock-ups out of newspaper.

Now draw another line. Part two down! Only one to go! See, this is simpler than you thought!

For the final part you get a little more space. Write down anything you think they'll ask for that you might forget. Start with what pattern you used, if you used one. Write down what fabric the costume is made from. Write down where you bought your wig/sword/shoes, and whether you modified them at all. You only get enough space to fill a 3x5 card, so be stingy. Remember, you'll be there to explain anything written, so if you only need two or three word clues, only write three or four word clues.

The shoes were bought, but I had taps installed to make them sound like the movie character. The leotard is a full bodysuit so that I don't have to worry about wearing an undershirt. I sewed the bottoms of the legs together so that there's no break in the shoe vamp. The wig is bought. I do my hair in a special braid wrap to make the sides stick out more square like the movie. The glasses are costume glasses from a costume shop. The cigarette holder is bought. The newspaper was grabbed just outside the con because I liked it better for stage than the smaller cig holder. 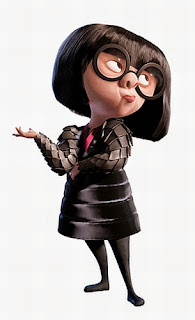 Now, one final thing. And you'll probably want to think about doing this one before the con. Find a color printer. Then find ONE good shot of your character FULL LENGTH. That means you can see his/her head and their feet. The bigger the better. Print it out full-size on an 8x10 sheet of paper. If you've got cool details you've copied exactly then think about printing out smaller pictures of those, but an 8X10 is a minimum. You can't prove to a judge how well you copied a costume without showing them the original. And trust me, after 4 hours of judging people's costumes in a small room you can't even remember what your shoe size is, let alone what that specific character in Naruto looked like. So be kind and print it out for them.
Posted by Aurora at 7:02 PM

Email ThisBlogThis!Share to TwitterShare to FacebookShare to Pinterest
Labels: Documentation