Decided on black boning channels.  Most people pointed out that red would compete and downplay the spiders, and I wanted them to stick out in the final product, so I went with black.

External boning channels are a challenge for a lot of people.  They're difficult to get straight and crisp and smooth.  Here's my trick for making them work out: 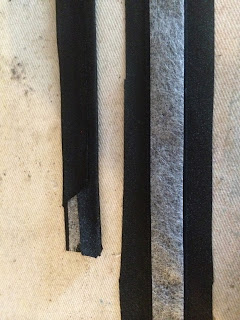 I use fusible hem tape.  First I cut a bias strip 2" wide (for 1/2" boning) with my rotary cutter.  I like to cut it a bit wider than double the channel width so that it overlaps a little on the back.  Then I center the boning channel on the bias strip's wrong side and put hem tape over top.  Very carefully I fold over one side and press it down onto the fusible tape.  You have to be careful to not let your iron touch the fusible at all or it will get all gunky and wreck the tape.  After one side is fused I fold over the other side snugly and press them both down.  Having the two sides overlap means that I can press with my whole iron without worrying about a strip of gunk down the middle adhering to my iron. 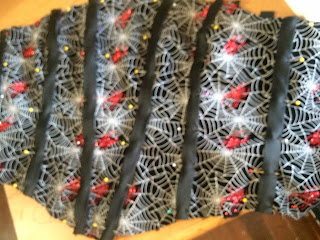 The overlap part is the back of the strip now.  I pin the strips on to the corset and carefully sew them down.  I tend to go down both sides from the top of the corset to the bottom.  It's not important which way you go, but it is very important that you either go up both sides or down both sides.  If you go up one side and down the other (how I usually put on boning tape) it will wrinkle the channel.  Using a teflon foot (or putting a piece of tape on the bottom of your foot and cutting around it) helps a lot, too. 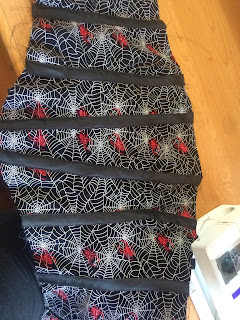 Here's my corset with all the channels, ready for boning and binding!
Posted by Aurora at 5:50 PM