On Sunday I talked about making costumes for kids.  There's another aspect to costuming kids, though, and that's competing with them.  Kids are unpredictable, and you never know what they're going to do onstage.


In crafting a performance for my niece and nephew I try to involve an adult as much as possible.  Having an adult onstage with them not only makes them feel better but makes them much more likely to follow the plan.  I've found that judges will readily overlook a helper adult in stage blacks.


Kids seem to be less susceptible to stage fright than adults.  Perhaps its their desire to please, or that they haven't learned yet about people judging them.  Or perhaps it's that audiences are really inviting for children.  I dunno. This doesn't mean that they won't make stage mistakes, though.  Thing 2 was really hard to get on stage at all because he likes to be contrary.  When he did get on stage he walked from one side to the other, barely stopping to look at the audience.  Fortunately he didn't speed walk, but the slow pace could be tortuous at times.  Grandma and I were able to break up his later performances by suggesting things he could do.  It was also beneficial that his first time onstage I went with him.  He looked a little intimidated but did fine, and it got him really happy to go onstage the rest of the weekend. 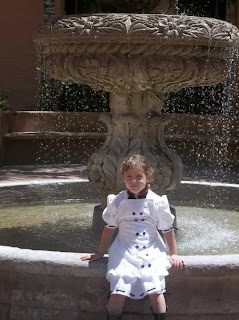 For Costume Con 32 I'm crafting a performance that involves all three children.  It's going to be difficult because the adults I would usually tap to help them are going to be involved in the entry, and there's not really a logical progression that allows them to be led onstage.  I'm trying to work out a creative way to start them onstage or have them led in by other adults.  That's really the key, to keep adults involved and prep kids so that they know what's going on and you can reduce the unpredictability.  In the end, though, kids will be kids, and sometimes their antics are even more fun and adorable than what you planned.
Posted by Aurora at 9:36 PM

Email ThisBlogThis!Share to TwitterShare to FacebookShare to Pinterest
Labels: Kids