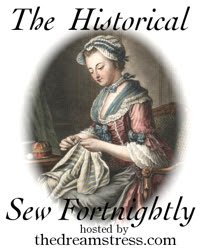 I've decided to join in on the Historical Sew Fortnightly hosted by the Dreamstress.  It's going to be a great way to get some historical stuff done, which I usually sideline for cosplay stuff.

Anyway, here is the first set of challenges and my ideas:

I  plan on sewing a petticoat for my 18th century stuff.  I don't have any!

I need a regency chemise!  So many undergarments I've skipped!

So many to choose from!  I really need to finish my candy stripey dress, so I'll choose that.

Challenge 3: Under it All

I also need a chemise for 18th century, so that's what goes here!

Sounds like a good thing for my 1870's Bustle Dress!

My candy stripey dress needs a petticoat to match!

I have an unfinished 18th ct. Muff that really should get done before Dress U.