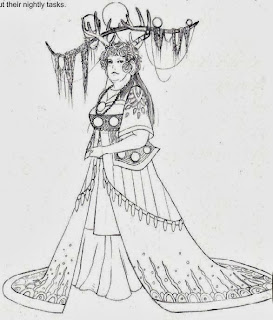 To be honest right now I'm kinda at a loss as to what to tell you.  I'm starting a huge project, but it will be another week or so before I can tell you all about it.  I'm starting a lot of things, though, and I can tell you about some others.  First, I'm getting some costumes in line.  This is usually the time of year that I concentrate a little bit more on historical stuff.  This year I'm hoping to do a 20's gown, a 17th century gown, and a 1840's dress before 2014 hits.  For all of those that includes all of the undergarments, so it's quite an undertaking.  I also need to get my first projects for 2014 in order and get all the fabrics and accessories together so that construction is all that much easier.  In some cases that means getting some undergarments in order as well.

First, though, I've got to get my sewing room in order.  I moved in May right around Costume Con, and I've really not done a lot of construction in the room.  Mostly we just filled it up with more and more boxes and I've done most of my work in the living room since my WorldCon costumes didn't involve much sewing.  I've also got some major research to do for Costume Con 32's big project, and I need to learn to tailor for Arisia's big Masquerade idea, so there's a lot of learning going on all around.

I've also got some non-construction stuff to do.  I'm writing articles for The Drink Tank now, and I really should be finishing up one right now.  I also need to write some outlines for some more vids.  I really want to get back to doing video tutorials, and I'd like to start vlogging, too.  I feel that I have so much to say, and yet, when time comes, I don't know how to say it :P  Also, the deadline for CC32's Future Fashion Folio is next week, I need to finish up and submit some designs.

Finally, I have a new nephew-to-be, so I am going to try and make a baby quilt for him.  It will only be my second quilt ever, so that will be slower than you might expect because I'm so new at it, although I have tried to compensate by choosing a pattern that is almost all squares and no curvy lines.
Posted by Aurora at 10:24 PM