Gosh, it's been almost two months since I did one of these.  Time certainly flies!  I'm not only getting ready for Costume Con right now, but also moving to another state, so to say I'm a bit busy is a drastic understatement!  I'm still managing to get things done though.  Right now it's a hobbit costume.  Thing 2 has decided that Hobbits are the greatest thing ever, so he's going to be Samwise Gamgee for the SF/F at Costume Con: 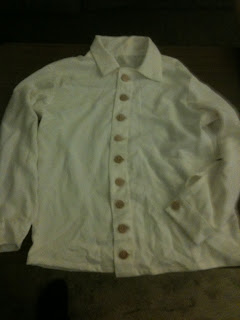 Shirt.  I'm not quite sure what it's made out of, there's a slight crosshatching to it but it has an awesome drape.  The buttons are wood, which seem to match what I can make out on the original. 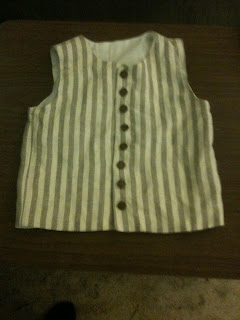 Vest.  It's made out of stripey linen and lined with the thinnest cotton I could find.  There's so many layers to this costume I'm worried he will overheat, so I tried to be as thin as possible without things looking cheap.  The buttons are antiqued brass shank buttons, very nice. 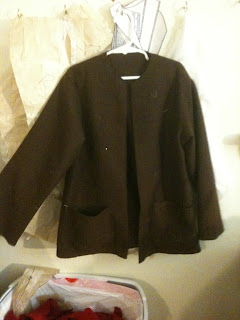 The coat is brown wool.  It's slightly felted so that I didn't need to finish any of the edges.  I'm still debating with myself whether or not I'll try to take some of the color out and distress it like the movie.  Either way the edges will probably get a blanket stitch in the long car ride to the con. 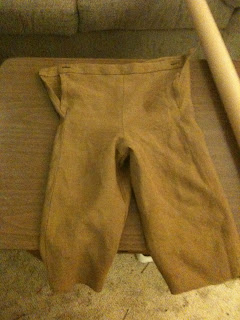 The pants are brown linen.  They kinda have a drop front/two fly system going on.  I added a seam where the flies are so that they're more durable for play after the con.  There's wood buttons that show, I still need to add some really flat buttons on the inside. 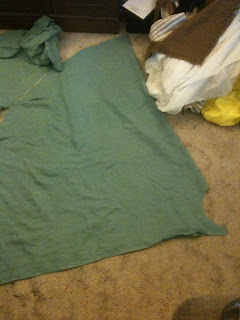 The cloak being cut.  I used the patter on the LOTR costume website:  http://www.alleycatscratch.com/lotr/Things/FCloak/FCloak_pattern.htm  It was pretty easy to miniaturize. 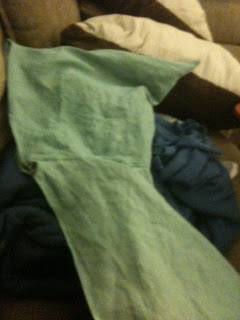 The finished cloak with hood. 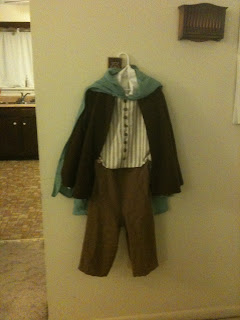 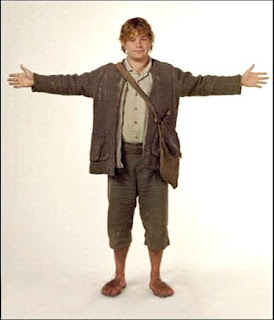 Side-by-side comparisons.  I think it ended up pretty good, don't you?  I've bought a cloak leaf and hobbit feet "spats" for his shoes, so he'll be comfortable and still look hobbity.  I'll be wearing my old Rosie costume.   9 years old and I can still wear it, hooray for back-laced bodices!  Thankfully I wrote up a making-of that I still have, it would have been hard to do documentation for it so many years later!

Next up: finishing up my seaside historical sew-fornightly (I know, I'm behind, but I just couldn't stand to hem tonight with my headache) and then doing fashion folio outfits for me and Thing 2.  I don't think I'll be accomplishing any new hall costumes, I'll probably take the bustle dress and Vanellope since they're comfortable and pack easy.
Posted by Aurora at 11:05 PM